As I watched “El Futuro Es Hoy” with Jorge Ramos and a panel that included Michele Siqueiros, Marcel Suárez, PhD,  Antonio Flores, PhD, John Deasy, PhD, and Ana “Cha” Guzmán, EdD, I was reminded of myself and my own experience. The panel discussed everything from principle problems in education in the United States to the importance of obtaining a college degree, and it reminded me of how important I knew, early on, education truly is.

I will be the first to tell you that, “education doesn’t determine your intelligence or your level of success,” but I can leave that for a later post. What I can tell you is that I was that student that Ana “Cha” Guzmán, the president of Santa Fe Community College, discussed. I was that student who didn’t believe much in herself and was SCARED! I was so scared to fail in college, especially knowing that my dad was paying for it, something I didn’t really think about during high school.

I decided to go to a Community College, Kingsborough (KCC) to be exact, right in Brooklyn, NY and fresh out of high school. It was a few bus stops away from home and it was a safe choice. Tuition wasn’t that expensive and I decided I would start off slow, but I would start, right? This Community College experience came easy to me. I excelled, I was motivated, and the professors encouraged me. Before my two years were over I began looking into a four year college. Why not try and receive a Bachelor’s, degree, right? I was scared, but this time around, I was more confident. It was probably the professors that I had and the fact that I felt like I would NOT allow myself to fail. My grades were good and I was accepted to a private college, still in Brooklyn, but this time, it would be more money.

I remember applying and being accepted. I surprised my father with the acceptance letter. He had no idea I had even applied and the look on his face, well it was an expression of pride I’ll NEVER forget. I soared there and graduated with honors. The courses I took were rigorous and really prepared me for the major I had selected. Graduating with a minor in English and a Bachelor’s in Early Childhood Education, I still wasn’t satisfied. I wanted more knowledge and knew I could do it. I did exactly what Ana described – I was excelling right from a Community College and moving my way up. 80% of Latinas aspire to attend college. When I left high school I didn’t aspire to achieve much of anything, but as the years went by my opinion changed, now I wanted more.

Raised by a Puerto Rican mother who didn’t even graduate high school and an American father who attended one semester of college and dropped out to become a police officer , I wanted more. My father, although he owned his own business, never pushed college on us, and my mother left the subject alone as well. He allowed us the choice to either go to college or go to work. Out of all of my siblings, I was the only one to graduate from college, my highest degree so far, a Master’s in Early Childhood Education, my final stop being New York University, yes a University, with honors and induction into Kappa Delta Pi.

Throughout the years as a teacher and now as a parent, I’ve seen the importance of preschool and that early foundation of education. I stress the importance to my students’ parents that WE are our child’s first role model and teacher, way before they come into a classroom. It’s important that we are an “example and role model” for our children. My father modeled to me the importance of working hard every day as a police officer as well as the owner of his Auto Parts store.

As the mommyteacher that I am, and in the day and age of the Common Core State Standards, I remind myself of the impact I will have on the lives of my children. Antonio Flores said it best when he stated, “the best inheritance you can leave your children is an education.” Whether it be through a degree or not, in my opinion we must remind our children that we SUPPORT them and that we ENCOURAGE them to do their very best. They need to know that they are capable. We need to educate our youth and their parents so that they know they stand a chance at a life with more stability and the security that comes with an education. We need to embed in their minds that there is a difference between a Community College and a University and we should all strive for the highest education possible. 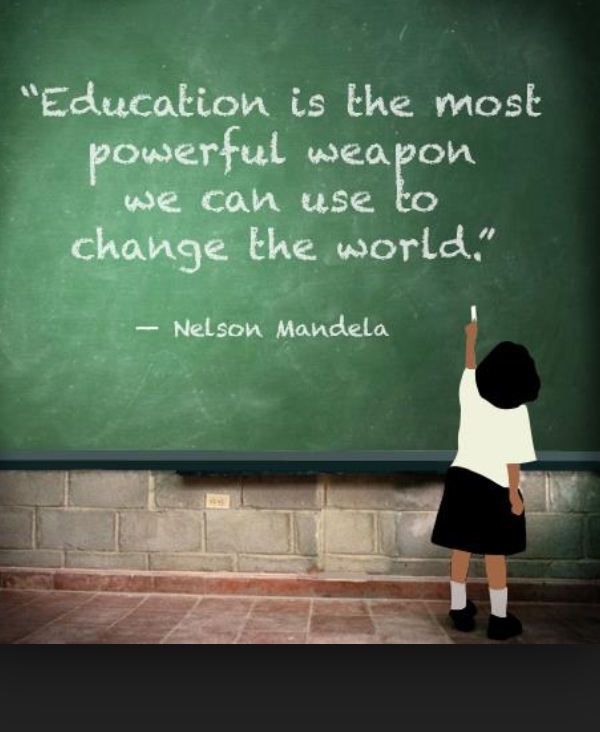 In this era of American Education, we need to educate our parents on the Common Core State Standards and teach them the concepts as well. Oftentimes, parents don’t understand what’s going on in the classroom due to a language barrier or because they too have no college or high school degree. There is still time for them though. Learning is ongoing and it never has to cease! Let parents begin to set the bar for their children and set those expectations high so that our children will be determined to reach further and achieve higher goals. Now is the time! Visit EsElMomento.com and join forces with us during Education Week and beyond to make a difference in the statistics and to have our Latinos attend Universities to change the stigma and our future! Tune-in to this week’s programs on Univision and let us dialogue about it using the hashtag #EsElMomento throughout the week.  Ay que trabajar duro! Let’s work harder!